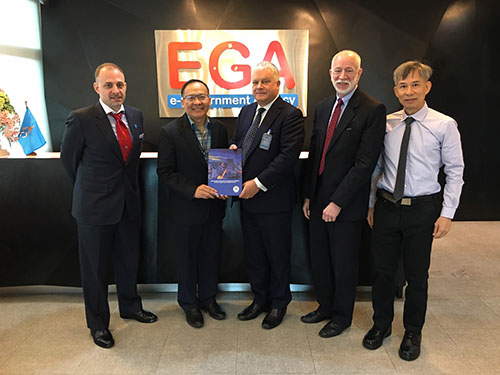 On Friday 11 May 2018, members of the Digital Economy/ICT Committee met with senior officials of the Electronic Government Agency. The EGA is responsible for the strategic plan (and its implementation) to transform the Thai government into digital government.

The EGA has developed a high level framework from which a detailed implementation plan can be developed. JFCCT published a detailed eGov strategic plan as a recommendation in 2014. A future Digital Government Act will make EGA the Digital Government Agency which will report into the PM’s office. It would make the Agency responsible for enabling and ensuring digitization of data, data exchange, and public accessibility of open data. It would have a regulatory role about compliance. The agenda included an overview of EGAs plans, and clarification of a number of issues and questions, including a whole-of-government plan, single-sign-on access, how agencies would re-engineer processes (especially in light of the Licence Facilitation Act).

Separately OPDC and EGA have announced plans for a cloud-based data base of Thai-government issued documents. The goal is that when interacting with the government, users needing Thai-government issued documents should be able to retrieve and access required documentation (or the relevant agency can retrieve them), and applicants would not need to provide the same information themselves. This plan’s scope does not currently cover foreign documents, and would be an interim measure. In the longer term, the data in a document would become part of an electronic record rather than an electronic form of a paper form.

EGA also advised about some RFIs (Requests for Information). JFCCT is grateful to Dr Sak and team for the dialogue and information; it was agreed to follow up on a number of areas of development.